The star of Section 105, Jayson Werth has a big birthday on Friday

I wrote a shorter version on my MASN column on Tuesday and some have asked for the full piece as I am limited on space on that site:

There is this player in Nats Park who has a cheering section out there in the unheralded part of the park tucked in between the foul-pole and the visitor’s bullpen in Section 105 in Nationals Park. That’s right, it’s in leftfield where the man they call out to there has numerous nicknames like “The Beard” and “The Werewolf” and some just refer to him as “JDub” as Bryce likes to call him and others rib him with calls of “Grandpa”, and the man with the big beard calls leftfield his position. 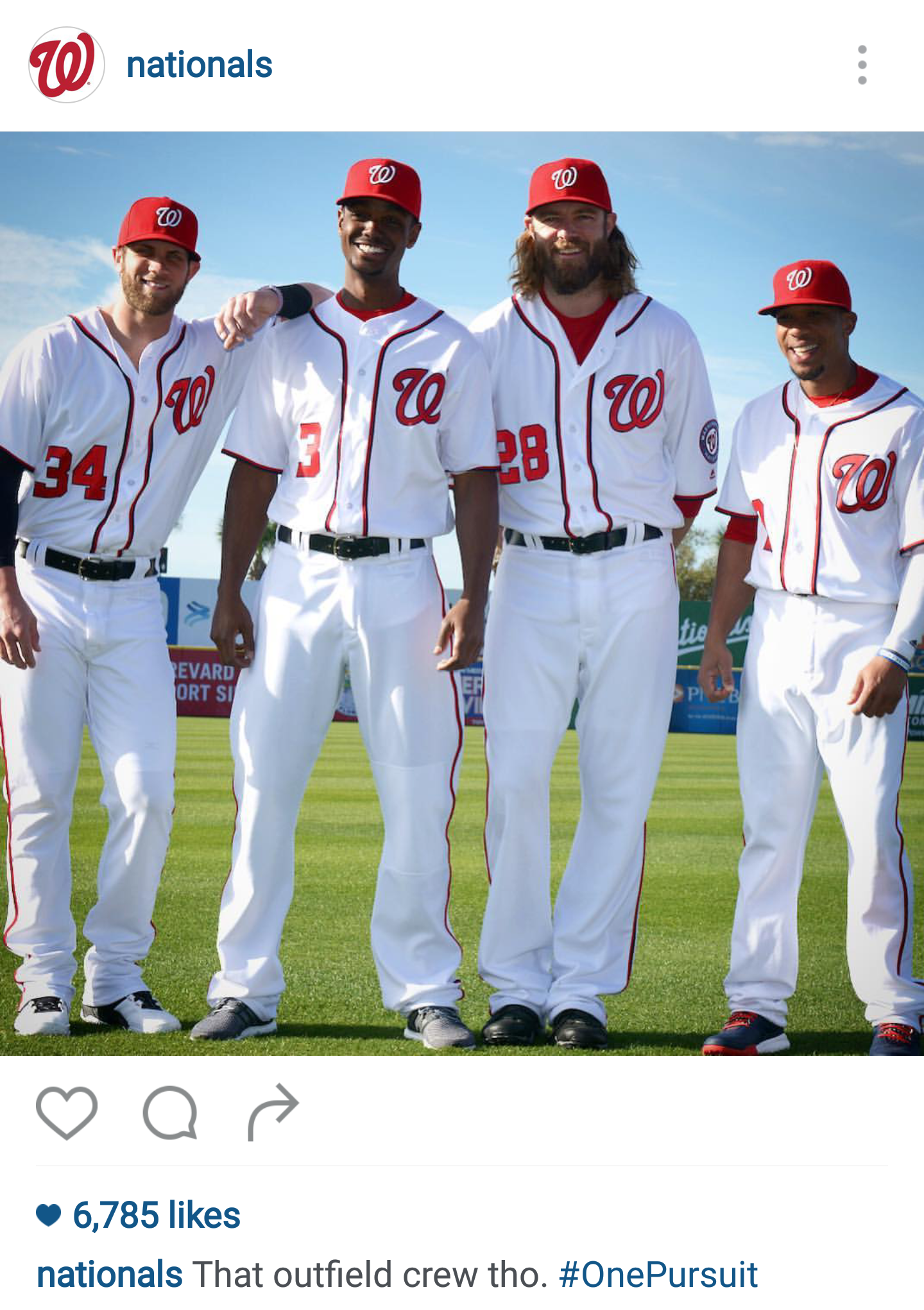 Jayson Werth could have gone to college and considered the University of Georgia but when he was drafted in the 1st round of the 1997 draft he turned pro. He started his Minor League career as a catcher and then tried some 1st base and then got moved into the outfield permanently. When the Nationals signed Werth as a Free Agent on December 5th of 2010, it shocked the baseball world. The Washington Nationals pulled off on that day the biggest deal in their history in a 7 year $126 million payday, and Werth became an everyday rightfielder over there in front of Section 139 and 140. Werth could cover so much ground back in the 2011 season that he would be sprinting after balls near Section 142 and 143 if he had to. Moving Bryce Harper last year to rightfield created this leftfield gig for Jayson.

To this day, fans will debate this free agent signing, and if you try to equate dollars to player value at his current $21 million per year salary you will just frustrate yourself. Enjoy the ride and see what “JDub” can do as he may surprise you at the age of 37 minus 2 days. Yes, on Friday in Miami, we will be celebrating Jayson’s 37th birthday. Jayson’s age is brought up often, and he knows from his ex-teammate and good friend Raúl Ibañez that your mind plays cruel tricks on an aging body, but Werth knows he has some mileage remaining.

“My dad always said, ‘You look good, you play good,’” Werth said to the Washington Post. “And I feel like I look great so I got a chance. “At some point, no one is going to want me,” he said. “That’s the reality. It happens to everybody. The trick is not letting it happen to you for as long as you can. . . . My will to work is still there. I still work hard. Until that day comes where I lose the will to want it or to work at it, I don’t see why I can’t keep playing.”

Werth is getting more ‘rest’ days than ever before, and you never know if this will be the season where G.M. Mike Rizzo gets another leftfielder and moves Jayson to the bench. It’s possible if Werth doesn’t heat up with the warm weather as Dusty Baker keeps talking about with both Werth and Ryan Zimmerman who are hitting in the low .200’s

“It’s gotten tougher to go night [game] to day [game] as I’ve gotten older,” Werth said. “It just comes down to production at the end of the day. If you can produce, age is just a number. Really. Obviously, you’re going to run faster when you’re younger and you’re going to throw harder when you’re younger. But look at some of those guys later in their careers, they become better hitters, you get more reps.”

Running is in Jayson’s blood as his father Jeff Gowan was a baseball star but also a football star as a D-1 wide receiver at Illinois State University and Jayson’s mom, Kim Schofield Werth, competed for a spot on the U.S. Olympic track team in both the long jump and 100 meters.

Werth talks of the day when he saw his career flash before his eyes as he suffered a serious wrist injury, and he made it back from that. He keeps bouncing back, and that’s Jayson Werth. He learned that resilience as a young boy and gets it from his grandfather Dick “Ducky” Schofield who played his last game before he turned 37 years old. He learned life lessons from his mom and dad, and also from his uncle Dick Schofield whose career ended right before his 34th birthday, and Jayson is determined to not let age dictate how long he plays and let his performance on the field determine that.

Werth’s grandfather “Ducky” was a tiny man and even at 5’9” and 160 pounds there were seasons he couldn’t hit his weight. He made the St. Louis Cardinals team and debuted as an 18 year old infielder. Ducky played in 19 MLB seasons but never close to a full year as Ducky appeared in an average of 69 games a year. He was mostly a utility bench player, and something he took great pride in. Ducky was teammates with some great ones like Stan Musial, and played alongside Eddie Stanky who was a player-Manager at the time. Ducky was traded to the Pirates and was teammates with Roberto Clemente and they got a ring in 1960 with Bill Mazeroski.

For a piece of great baseball trivia we uncovered through our research, Ducky was also teammates with Sandy Koufax, Mickey Mantle and Willie Mays all during the 1966 season. Yes, Ducky moved around a lot, and Ducky Schofield knew perseverance and life lessons. Jayson’s biological father Jeff Gowan never made it past the St. Louis Cardinals minor league system, and Jayson’s stepfather Dennis Werth played a few years in the MLB and was finished by the age of 29. Jayson has surpassed them all in staying in professional baseball this long, and his grandfather and uncle, like Jayson, all have one World Series ring, and Jayson is determined to get another before he hangs up his jersey for the last time as that remains his ultimate goal going forward.

A few weeks ago Jayson Werth went over that leftfield wall in front of Section 105 to rob a HR from Byron Buxton, and this new defensive alignment started to pay dividends where Jayson has been playing a little deeper. He robbed a sure double last week off the wall. It had been a while since Jayson went over the wall to rob a HR, and the last time he did it was in St. Louis in 2012 when he leaped above the State Farm sign and robbed the Cardinals’ Daniel Descalso of a two-run home run in the sixth inning in the NLDS playoffs. 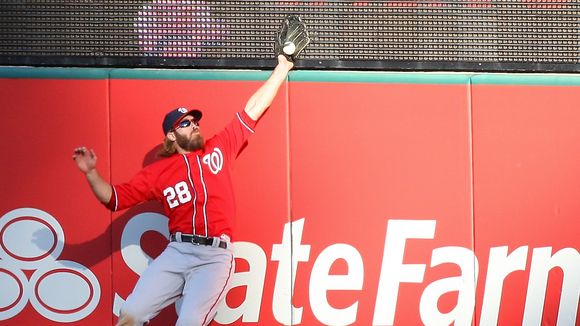 Werth is still robbing home runs and making plays, and actually is 3rd on the 2016 Washington Nationals with 20 RBIs which is 3 behind Daniel Murphy. Werth has been quietly accumulating RBIs out of that 6 hole and is on pace for 86 RBIs this season. Last night, Werth was moved to the 2-hole so we will see what happens going forward.

Don’t count Jayson Werth out. He will persevere and pleasantly surprise you if you let him.

This entry was posted in Jayson. Bookmark the permalink.
← Previous Article | Next Article →