Sure would be nice if we could just forget the last two games of the Marlins series, wouldn’t it? Well, since the second 18 games of the season ended with the front end of Saturday’s doubleheader, let’s do that. For a little while anyway.

The Nats were 14-4 after the first 18 games – a terrific start.  In my post recapping that first 18 game set, I noted that the Nats don’t have to be world beaters for the rest of the year to have a very good season. Just averaging 10-8 in each succeeding set would leave us with 94 wins on the season.

They sure weren’t world beaters in the most recent 18-game set, going just 9-9. But, to be fair, they faced much stiffer competition than in the first set, including what looked like it could be the toughest road trip in team history. Here’s the summary, including where the Nats’ cumulative slashline stood after each game.

So the set started out with a disappointing 3 game sweep at the hands of the surprising Phillies, who were 21-15 after 36 games. Getting a total of 6 hits in the second two games of the series didn’t help. But then the Nats headed to St. Louis and, to surprise of everyone, swept three games from the Cardinals (19-17). They scored 17 runs in the series, and got strong outings from Stras, Max, and Joe Cool. After the disappointment of the Phillies sweep, beating the Cards in their own house was very satisfying. The Nats liked it too:

Not much to say that hasn’t already been said about that disastrous four game sweep. Joe Maddon took Bryce completely out of the games, walking him a total of 13 times (4 intentional) in 19 PAs, and the Nats were out hit, out pitched, and out managed throughout. The 13-inning game on Mothers Day to end the series was particularly frustrating, with Ryan Zimmerman leaving an astronomical 14 men on base, and the Nats failing to score a run after the 5th inning. If you have the intestinal fortitude to relive Bryce’s bizarre day in under a minute, take a look at this.

So even though they did it in a way that probably no one predicted, the Nats split the tough road trip, going 5-5. They then returned home to face the Tigers (15-21). Three tense and exciting games followed, and the Nats won two of them to start off one of the most eventful weeks in Nats history. Let’s recap:

Stephen Strasburg has signed a "significant long-term extension" with the Nationals, according to a person familiar with the situation.

And that was just Monday. 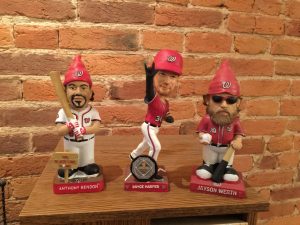 And that was a game for the ages, with Max striking out 20 Tigers to tie the major league record. Lots has already been said about that game, but here’s something I hadn’t heard until I went looking for good tweets to put in this post:  his fastest pitch of the night, and the year (!!), was the one that struck out Miggy in the 9th!

In case you were at the game or not listening on the radio, here’s C&D’s call of each and every one of those 20 Ks.  Yes, it was a “Remember where you are, so you remember where you were” moment.  Did Mark do a “Sweet Fancy Moses”?

And then there’s this:

And for the sentimental among you, this:

JZnn’s return got kind of lost in the shuffle didn’t it?

Whew. What a week.

But wait, there were still the first two games of the Marlins (19-17) series to finish up the 18 game set, and the Nats needed to win them both to finish 9-9.  They did, with Bryce finally getting a pitch to hit on Friday night and depositing it in the right field seats.

My apologies for the blurry table (now fixed!).  We’ll try to figure out what happened before the next 18-gamer.  You can download the Excel file with the data by clicking the link below:

The numbers are truly startling.  Bryce had a BA of just .218, but walked 30 times for an astounding OBP of .513.  Despite having only half as many hits as in the first 18 games (10 vs. 20), his BABIP was actually higher in the second set of 18 games, probably because he hit so few homeruns — (2 vs. 9), and took so many walks.   The league is adjusting to his immense talent.  The question now is how he, and the team, respond.

Looking ahead for the Nats, they start the next 18 games in the hole, having lost the first two in dispiriting fashion to the Marlins.  We have another series with the Marlins next weekend in Miami. By my calculation, we’ll get Jose Fernandez in that series too. We also have two big series (first away, then at home) against the Mets (21-15), four games at home against the Cards, and a series against the second place Phillies (no, that is not a typo!) to close out the first third of the season.  At that point, we should have a pretty good idea of what this team is made of.

And lots more highlights to enjoy.