Big win by the Nats to come from behind. Drew, Harper, Heisey and the bullpen get it done!: Postgame

Stephen Drew has to get the first star tonight for his pinch-hit game tying 2 run HR and Bryce Harper the 2nd star for his go-ahead 2 run HR. The 3rd star to Oliver Perez for getting Gio out of trouble with a doubleplay ball with bases loaded. Chris Heisey had a huge pinch-hit HR to make the margin 2 runs for the 9th. Jonathan Papelbon with a quick save that was his 359th of his career that moved him past Troy Percival for sole possession of 10th place on the all-time saves list. Congratulations  Paps!

Gio Gonzalez officially lasted 5.0 innings as he was pulled in the 6th with no outs and bases loaded. With the combination of relievers Yusmeiro Petit and Oliver Perez they stranded all 3 runners from scoring and that saved the game in the 65th inning. Two runs scored on Gio however he gave up no earned runs because of errors.

The Nats defense was not good today and once again many of the plays not made were not scored errors. There were some spectacular defensive plays, and the best plays were Werth robbing a double at the wall, Rendon saving a deflection from going into the outfield with a runner rounding 3rd base and the game ended on a great scoop by Ryan Zimmerman on a poor throw by Espinosa.

The Nats had 2 pinch-hit HRs tonight for the first time in team history as Stephen Drew with the game tying 2 run pinch-hit  HR in the 6th inning and Chris Heisey hit one in the 8th inning to get to the final score of 5-3. That gives the Nats 6 pinch-hit HRs as a team and only trail the Cardinals who have 7. 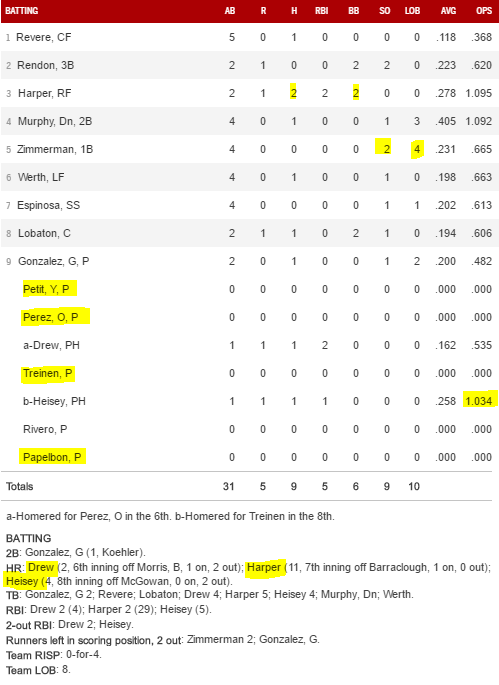 This entry was posted in Drew, Harper, Heisey, Recap. Bookmark the permalink.
← Previous Article | Next Article →