Ben Revere started his rehab assignment on Thursday with the Triple-A Syracuse Chiefs, and Revere made an immediate impact in the game going 2-3 with a run scored and a RBI. Revere batted lead-off with Trea Turner in the 2-hole. Brian Goodwin in the game went 1-2 with 2 walks. A.J. Cole pitched 6 innings of shutout baseball yielding 3 hits against the Pawtucket Paw Sox.

Here is an add-on to this story from Kevin Brown of the Syracuse Chiefs who did a recap for us from what he saw last night and insight from pitching coach Bob Milacki:

“Ben Revere looked good. Swung the bat aggressively against a tough lefty Eduardo Rodriguez who is on his own rehab assignment form the Red Sox.

Revere put in 5 innings last night and got 3 at-bats.

A.J. Cole located much better last night. His changeup was good and he had better “angle” on his delivery and fastball according to pitching coach Bob Milacki.

Trea Turner made an error last night (3rd of the season), but it was on a bit of a tough play, and he recovered nicely. the range and the arm strength on that play (see video) to nab Chris Marrero were superlative. He’s looked steadier at shortstop this year for sure. I think he’ll continue to improve.” 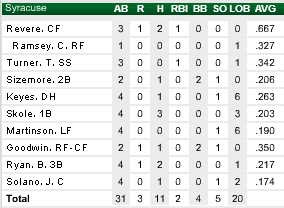 Trea Turner turned in a Jeteresque Web Gem from deep in the hole at shortstop that you have to see to believe. I apologize ahead of time for the video quality.

Were you one of the lucky 72 people who got in on the New Era limited edition MVP cap designed by Bryce Harper that was featured in a Maxim article? MAXIM Bryce Harper New Era Cap launch

The $80 limited edition cap sold exclusively by MAJOR Showroom on 1426 Wisconsin Avenue in Washington DC, and they sold them out immediately. What people may not have known was inside the packaging was a surprise. Topps baseball cards produced 3 versions of a card #’d to 34 which will sell by itself for more that $80 and a ticket to yesterday’s game so you could pick up the cap at the stadium on Bryce’s 4 year anniversary as a Major League player. Embroidered on the inside of each cap is Bryce’s tagline “DC or Nothing”.

If you thought $80 was expensive, they are already popping up on eBay at over $200 in the original packaging. 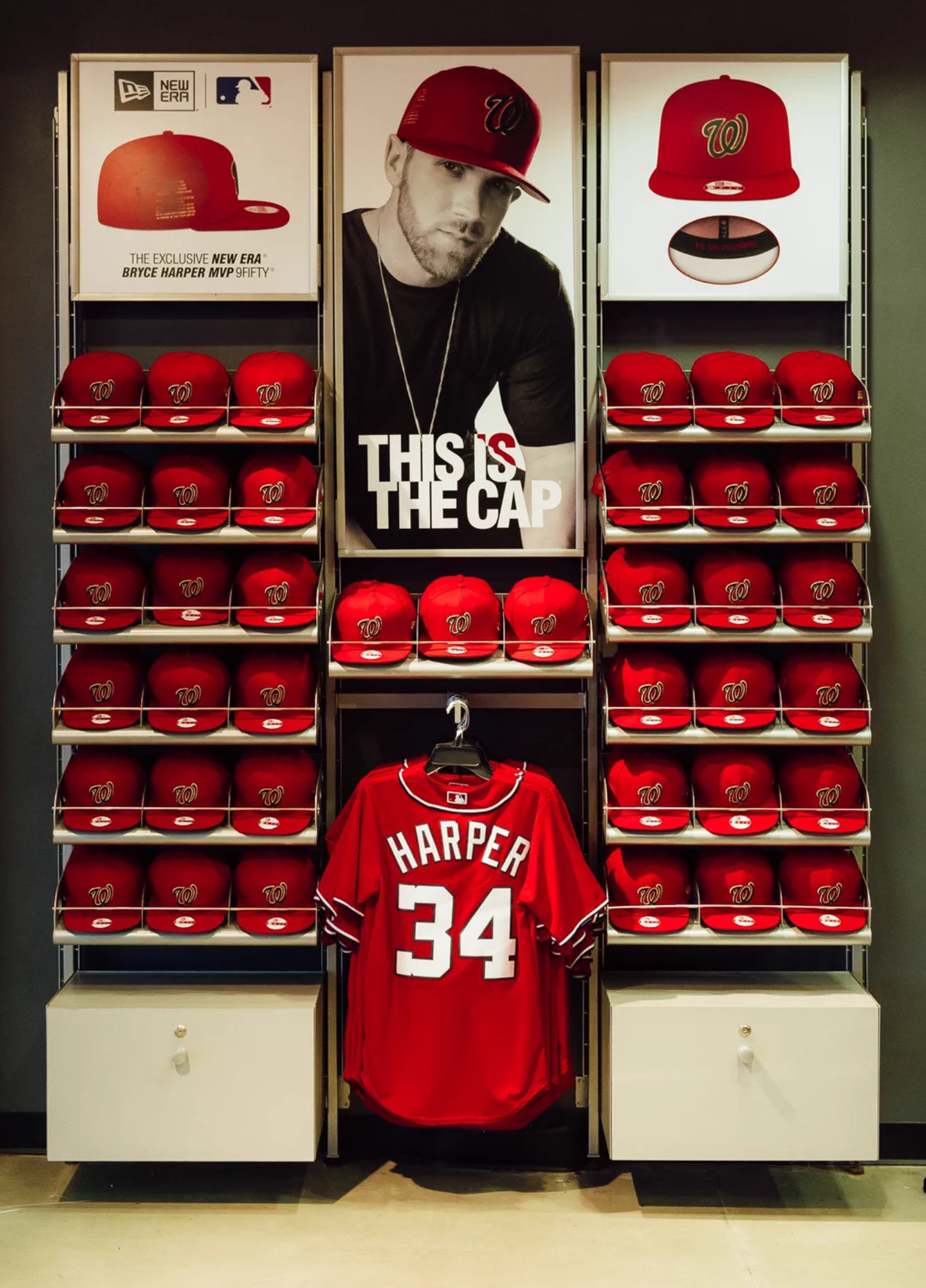 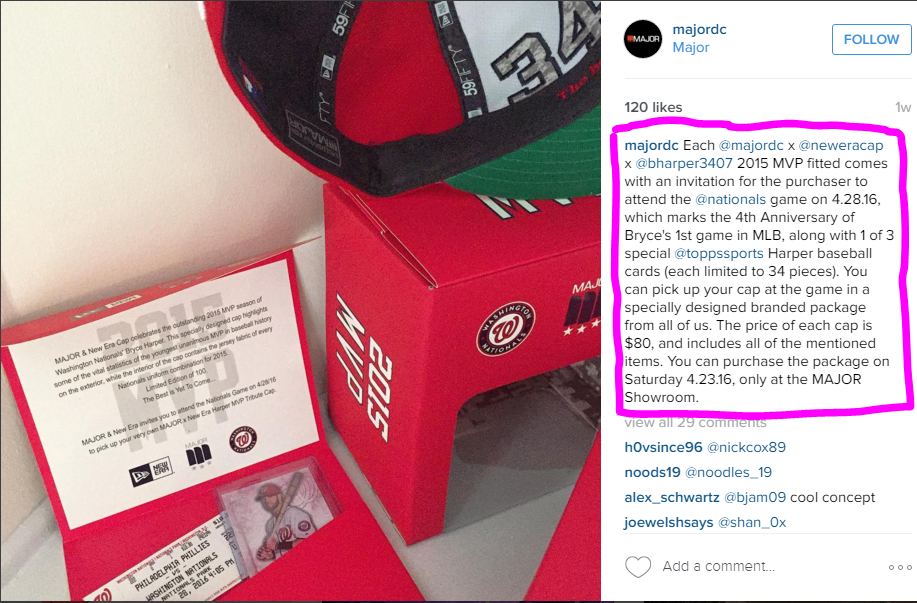 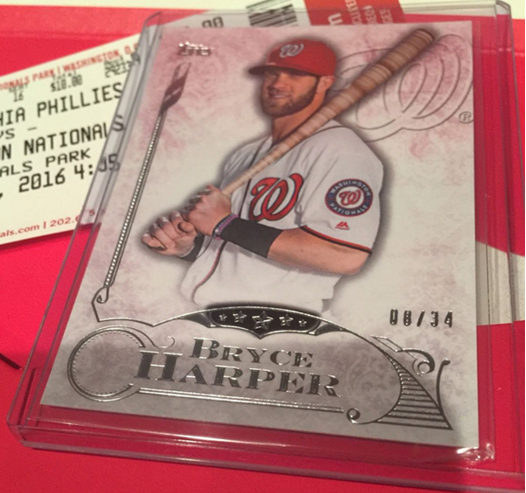 From New Era Cap designer Shawn Curtin’s Instagram: @psyfonlabs @majordc and @neweracap celebrate the outstanding MVP season of Bryce Harper. I got to sit down with him and design some caps. He’s a super chill guy and we had fun coming up with some dope designs. One of which is only available @majordc. 72 pieces available today at the MAJOR showroom ($80) & pickup the cap on Thursday 4.28.16 (Bryce’s 4th Anniversary in the league) @majordc pop up shop @nationals stadium (a ticket is included). The best is yet to come… 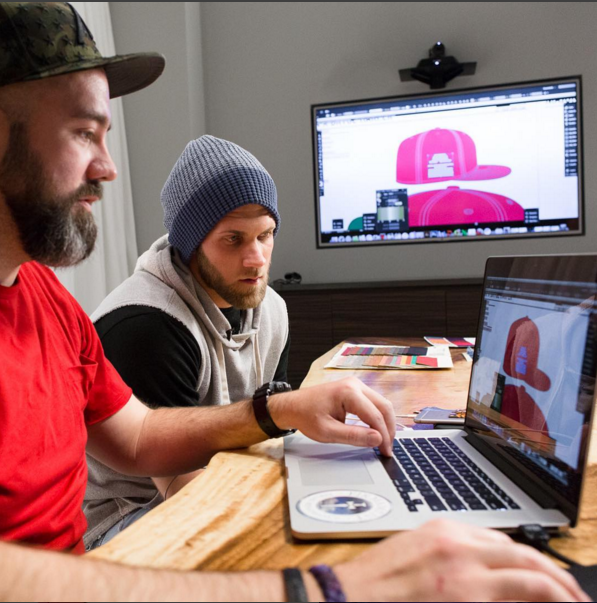 As you wake up this morning, you will be shocked by this NL East news that reigning MLB batting champion Dee Gordon was suspended by MLB baseball immediately for 80 games for PEDs. MLB released this statement at 1:21AM EST:

Jeff Passan of Yahoo Sports elaborated on this news:

The Dee Gordon announcement came tonight because he only just dropped his appeal and wanted to tell his teammates what happened.

The next time the Nationals could face Dee Gordon would be in the 3 game series against the Marlins starting on September 19th.

This entry was posted in Harper, NewsAndNotes, Revere, Turner. Bookmark the permalink.
← Previous Article | Next Article →