From Cal Ripken Jr. to Bryce Harper, the Power behind the scenes: Ninotch

Fans of the Washington Nationals baseball team probably don’t know what Ninotch (pronounced ˈnē-nōtCH) is or who Tatiana Tchamouroff is and why both names are mentioned in the same sentence with the Washington Nationals. Tatiana Tchamouroff’s name sounds regal and very Russian, and she can certainly speak Spanish which Jesus Flores appreciated as he explained to her in Spanish that he had pain in his shoulder. Tchamouroff’s father was of Bulgarian heritage and her mother El Salvadoran which is how she was fluent in Spanish. She is a mix of American sugar and spice, and Salvadoran azúcar and Bulgarian chubritsa.

What does Tatiana Tchamouroff and Jesus Flores’ shoulder have to do with each other? Tchamouroff was interviewing for the massage therapist position for the 2008 season with the Washington Nationals when Flores was introduced to her as a test case. During Tatiana’s interview process, she had 11 players she had to massage, and was judged on that.  Tatiana was also able to translate for other players where the aches and pains were so she could relay that information in English to the medical staff. The fact that Tchamouroff could speak Spanish was a distinct advantage in a locker room filled with many Spanish speaking players.

It was a lengthy interview process in which former head trainer Lee Kuntz called her with the good news that she got the job she so badly wanted and deserved in a position in the sports world dominated by men. She would remain in that job through the 2012 season in which she saw some of the toughest years in Nats history to the best year in Washington Nationals history in 2012. While Tchamouroff isn’t an employee of the Nats today, she still is tied to several players and ex-players and other professional athletes. 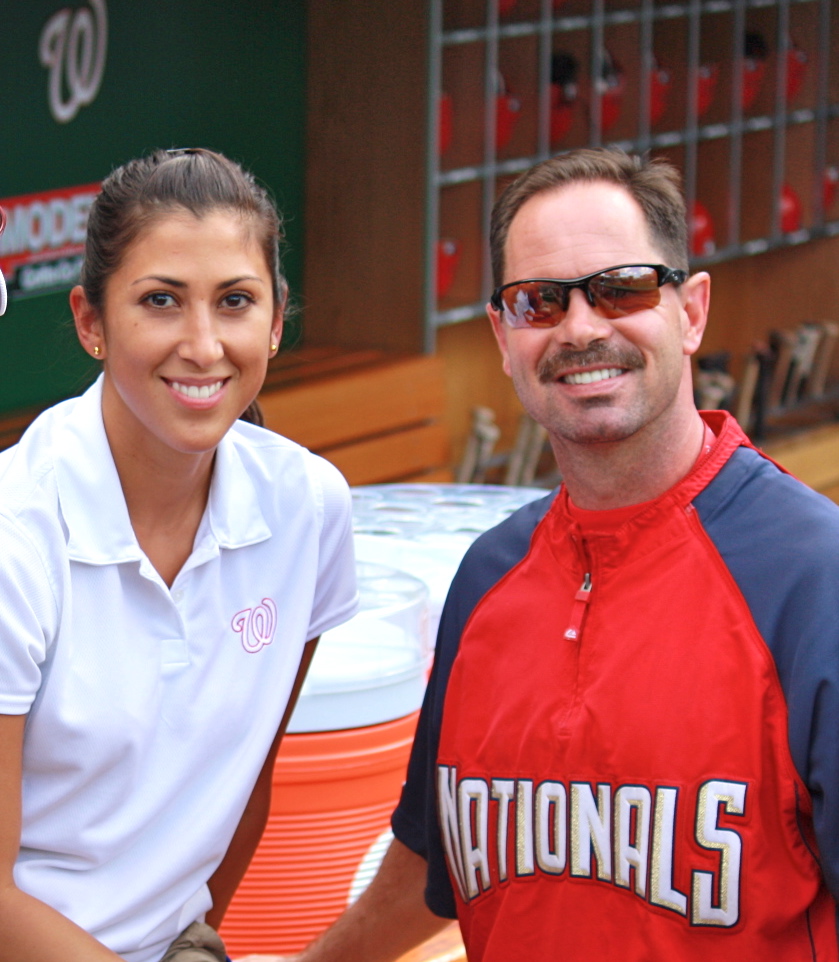 In strange coincidences, I had met Tatiana many years ago through my hair stylist who was in the same tired building on 7720 Wisconsin Ave. where the Ninotch Retreat spa was located on the top floor of the 2-story building with linoleum tile and a narrow dark stairwell like my 1960’s elementary school. The 7720 Wisconsin Ave. location was the start to a thriving business even before Tatiana’s relationship with the Nats. Years later, I ran into Tatiana in the Nats’ clubhouse in one of those “What are you doing here?” moments, and quickly it was clear that what she was doing was sports therapy with serious results!

Ninotch and their growing staff relocated their Bethesda location 3 years ago to 8301 Wisconsin Avenue in a new building on the north side of the Bethesda business district as you pass NIH and Bethesda Naval Hospital, and you can’t miss the artwork in the window that Bryce Harper personally chose for Tatiana. 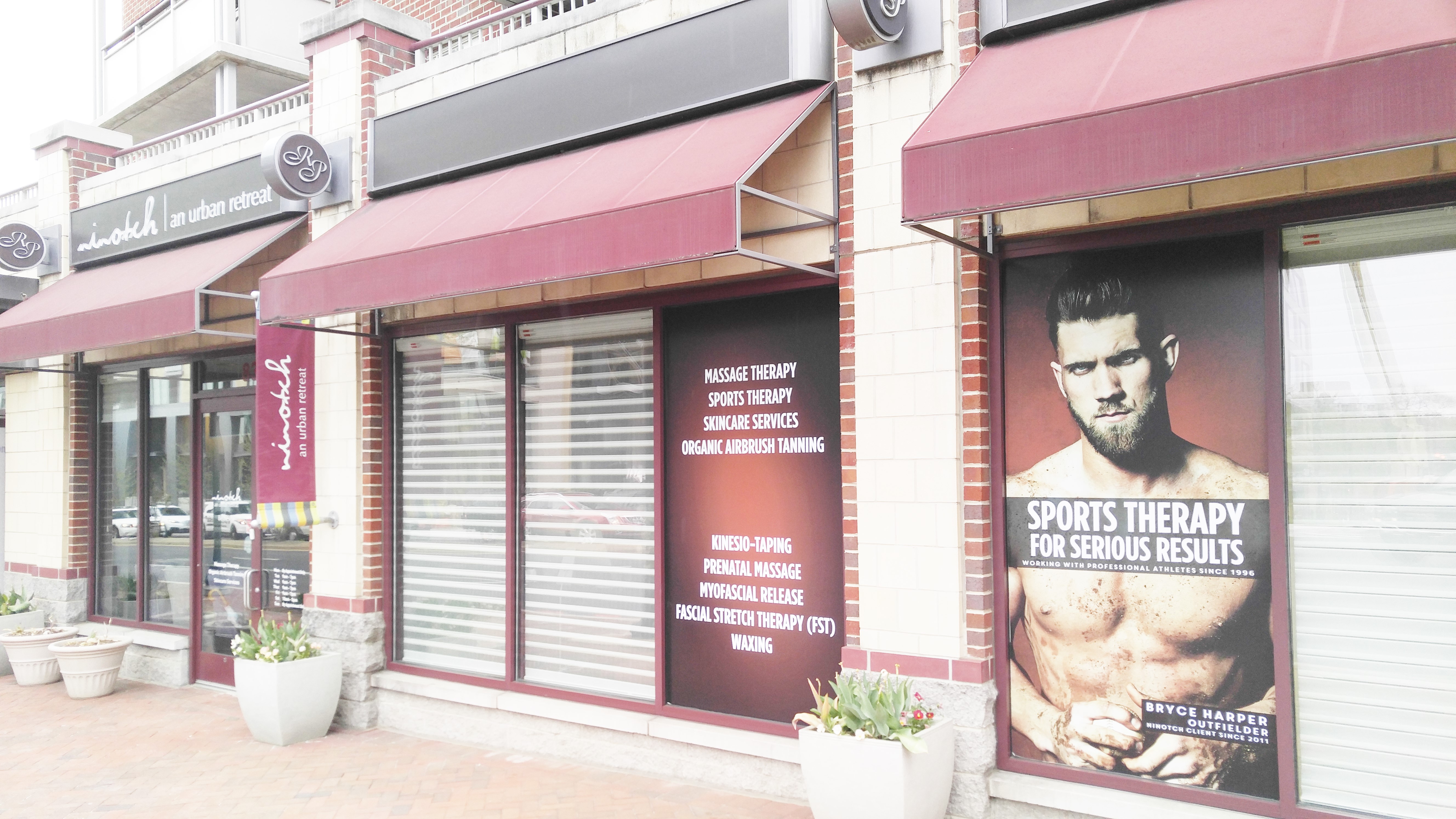 Tatiana’s big break in her entrepreneurial endeavors as a self-employed massage therapist was in the 1990’s when she was in her 20’s, and her sister introduced her to Brady Anderson who was a star outfielder for the Baltimore Orioles. That introduction became the start of her career helping athletes. Soon thereafter, Cal Ripken Jr. and his balky back would be fixed by Tchamouroff and would be a client for the rest of his playing days until he retired in 2001. She would work with Orioles players as clients, but was never hired by the team. The Nationals were smart enough to hire her and her impact was felt immediately when she ‘fixed’ Dmitri Young of his excruciating back pain that medical doctors could not fix and could not figure out.

Tchamouroff moved from behind the scenes in 2008 to front and center on news shows when former GM Jim Bowden said that the team had plans to send reigning Nats All Star Dmitri Young to the Mayo Clinic in Rochester, Minnesota, to get a third opinion on his back, and shortly afterward those plans were canceled because Young had been fixed by massage therapy. The pain was so intense before Tchamouroff ‘healed’ Young that he was also set for an epidural to block the pain. “I wasn’t expecting it,” former Nats general manager Jim Bowden said at the time. “I certainly didn’t think it was going to come from a massage therapist.” Well, this wasn’t just any massage therapist.

“Once Tatiana worked on my hip, that was it,” Dmitri Young said in 2008. “It fixed everything. It made all the difference.”

Tchamouroff talked about how she took a chance by trying a procedure many would not do as she worked on Young. She used her extensive knowledge to use muscle testing to locate a trigger point. She was confident in herself that this could work and only a small chance it could have gone wrong and increased Young’s pain, but she followed a hunch and was correct. “I had him lay on his back and went above the hip through his abdomen on his front side to get to the pain in his back,” Tchamouroff said. “Sure enough, I found the area in a big knot that I could feel through his front side.” Healer, from a hunch, and being so new with the team Tatiana felt like she risked her job she had only held for a short time if it didn’t work and Young’s pain increased. In fact it worked so well that Dmitri Young was back on the field and hitting again soon afterwards. It was also groundbreaking in earning the trust of players as she fixed Young without the medical procedures recommended by more than one doctor.

The years went by and players on the roster changed and Tatiana was a constant in the clubhouse through 2012, and the demand for her services increased to a point where she had to bring her staff with her as she had specialists in Ninotch depending on the area of pain and Tatiana added this, “Our specialties are: I specialize in back pain, Hannah is our knees, hamstrings and hips specialist, and Seth is our neck and shoulders person.”

Tchamouroff was there for Bryce Harper’s rookie season in 2012, and the magical season that 2012 was for the Washington Nationals. After the 2012 season, the team needed a larger time commitment from her, and she just couldn’t give Bryan Minniti, who was the well-respected former Nationals assistant general manager, that commitment which led to her leaving the team on good terms. As Tatiana said, “You always wonder if you make the right decisions when you go in another direction.”

The good news is that Nats’ players like Bryce Harper continue to be clients, and Bryce has been a great referral source to Ninotch sending family and friends her way. Former players are in her phone’s contact list and when their teams are playing in the region they are still making appointments.

When you sit with someone special like Tatiana Tchamouroff, there is clearly a 6th sense in this intangible way that she senses things that others don’t. She will watch a baseball game and see something with a client, and text them with a hunch. When Tatiana has a hunch, her clients listen. She doesn’t name names but she recently saw a client on TV and knew his hip was sore. Sure enough, that hip was a little sore, and they made an appointment to work on it. All of the success brings long hours, and Tati’s husband Mike is very supportive of her work, and he helps out where he can. She is a special person who has changed lives riddled with pain, and the issues associated with it.

For those hoping for a Northern Virginia location, you’re in luck. All of Tatiana’s success would eventually also lead her to branch out in January of this year to Falls Church, Virginia as part of Advanced Kinetics Physical Therapy group with former Nats physical therapists Dr. Angela Gordon and Kwang Han.

Don’t think that Ninotch only treats star athletes and celebrities. They have an extensive client list that includes our own sjm308 who has known Tatiana for years, and sjm308 can tell you how she healed his pain and has been an on-going part of his well-being. 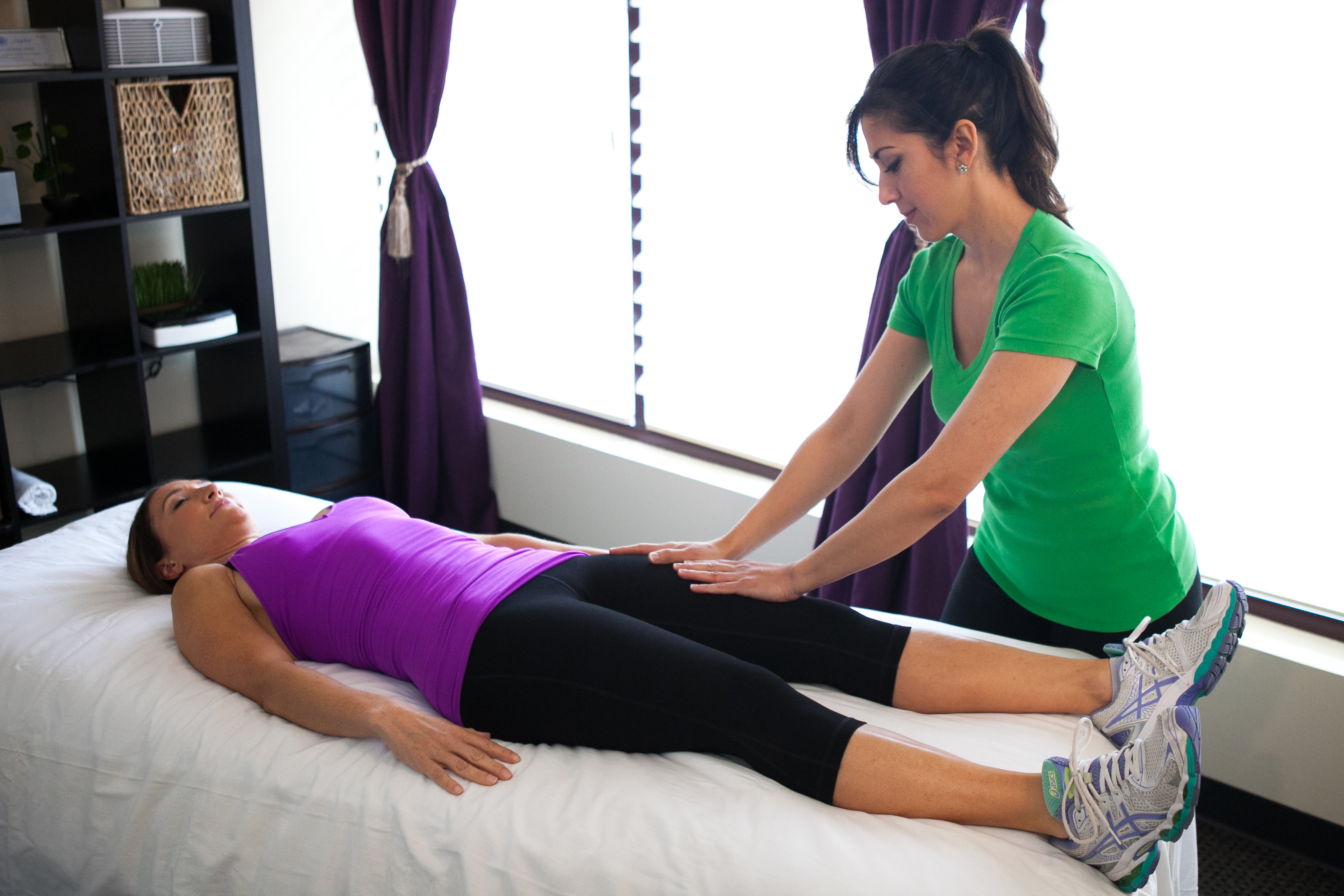