The Mixed Bag of Spring Training Stats for the #Nats

We all know the dangers of relying on Spring Training stats; however, they also can’t be totally ignored in some cases. Danny Espinosa for instance shows that he is struggling in a small sample size while Scott Sizemore looks like a Hall-of Famer in his small sample size.

#Nationals manager Dusty Baker said yesterday there will be open competition between Turner, Espinosa, & Drew for the Nats starting SS.

Here are your stats so far for your Washington Nationals this Spring on games through March 15th. 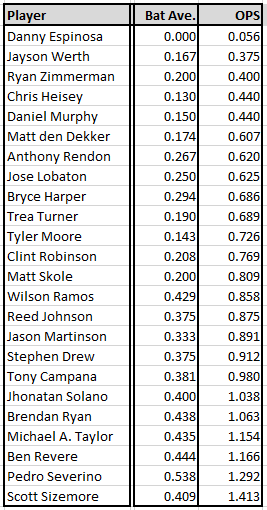 As was noted in these small sample sizes, the Trea Turner example used in the comments section earlier noted that an infield groundball that Trea Turner beat out for a single was inexplicably later changed to an error. That one scoring change if it remained a single would have changed his BA to .238 and his OBP to .320. That’s the impact of small sample sizes.

What can we learn from these stats? Very little in and of itself. It’s the quality of the at-bats and who the pitchers are and the situation.

Baker said he's noticed Espinosa's LH swing getting long. Said he, Schu trying to help fix it. Espi 0 for 14 so far but… #smallsamplesize