Danny Espinosa is not in today’s starting line-up. Will start Tuesday.

There has been rumors lately that Danny Espinosa has been playing hurt, and these just seem to be rumors as some try to explain how Espi is hitless in the entire Spring with just 1 walk and today he is replaced by Brendan Ryan in the revised line-up and listed as a bench reserve. 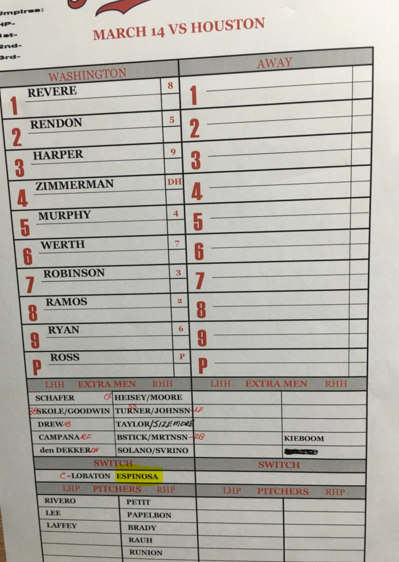 This Tweet is a little out-dated at Trea Turner has started to step it up and of course he had a hit taken away on an infield single later changed to an error that was mind-boggling as the 2nd baseman had to charge the ball and speed kills as Trea just beat the throw to 1st. There was no booting the ball or a bobble.

Officially Espinosa is 0 for 14 with 7 strikeouts and 1 walk. Trea Turner now has 3 hits going 3 for 17 with 4 walks and 4 stolen bases

Certainly there will be more news to follow on this….

Here is your Nats starting line-up:

UPDATED: 11:40AM 3/14/16 Danny Espinosa is set to start tomorrow and lead-off vs Collin McHugh

This entry was posted in Espinosa, InGame. Bookmark the permalink.
← Previous Article | Next Article →