Bryce Harper is under contract in the employment of the Washington Nationals through an unknown date in early November of 2018. There is certainly many possibilities of what can happen in the future, and while time is finite, there should not be an immediate rush to ink Bryce Harper to an extension. With that said, sooner is better than later as shown with history, and history also knows that negotiating with Scott Boras won’t be easy. Bryce already might think the starting point begins at $400 million….but don’t sell him short! That is today. Market conditions change and the upcoming CBA could change the dynamics. Free agent years can play havoc on a player’s stress level. Look what it did to Ian Desmond.

Marlins right fielder Giancarlo Stanton currently has the largest contract in MLB history after inking a 13 year, $325 million deal in 2014, and that averages to just $25 million a year. Stanton signed that deal at 24 years old.  Stanton’s best WAR season was in 2014 at 6.5 while Harper achieved a 9.9 last year. Both players have had their issues with staying healthy. Stanton has averaged 4.17 WAR/YR. It puts him right at that magic $6 million per point of WAR which is where Fangraphs had projected it.

What is Bryce Harper worth? As they say, whatever someone is willing to pay him.

Epic having the best seat in the house for Scherzer v Harper today at live batting practice at the Washington Nationals #SpringTraining practice. Two at the best in the world at what they do ⚾️⚾️⚾️ 🎥 for @Nationals on a @GoPro | assist by @bogdogphoto | ✂️ by @aaron_wendler | #gopro #hero4 #goprooftheday #mlb #nats #videooftheday #mlb2016 #harper #scherzer @bharper3407 @maxscherzer31 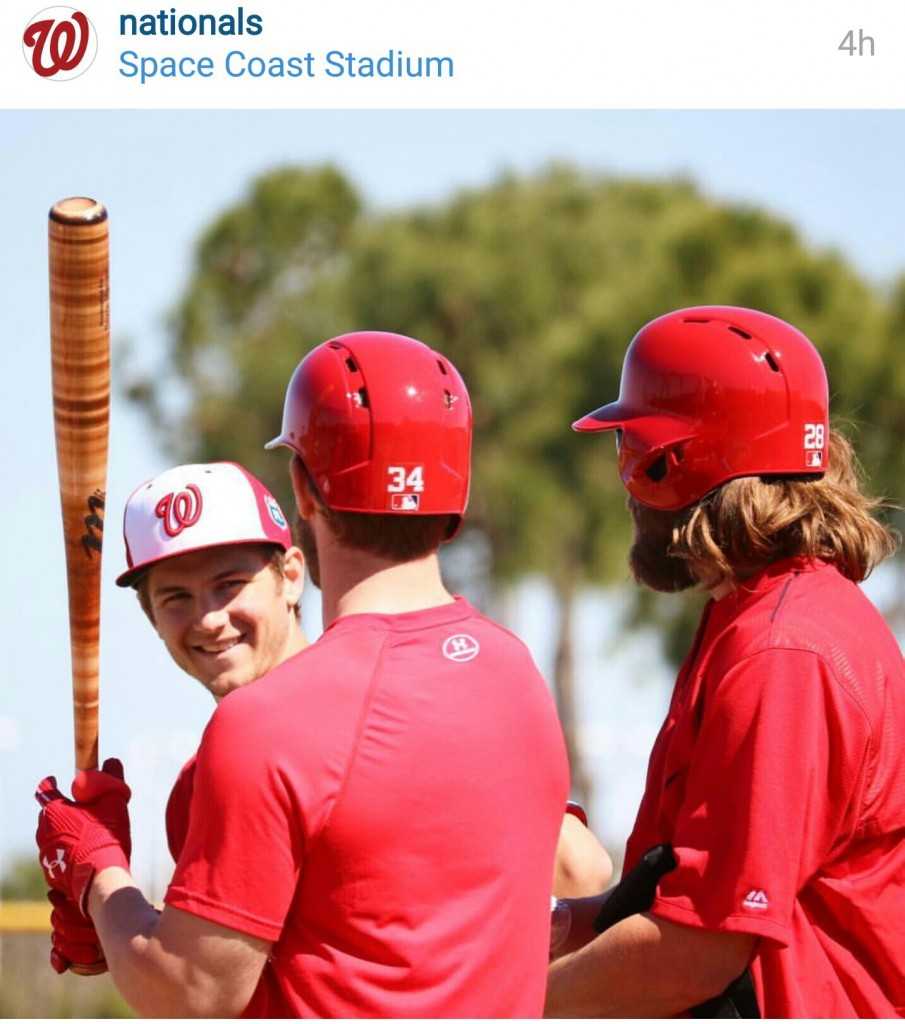 It was 2 weeks ago when Bryce Harper said this on a radio interview on 106.7 The Fan when asked about the largest contract in MLB history, “Yeah, I mean I don’t really think about that stuff. I just try to play the years out and do everything I can to help my team win. But don’t sell me short. That’s what you’re doing right now to me, so don’t do that. [laughs]  I’m looking forward to just playing this year, just looking forward to playing the next couple years. And I think all that stuff will play out.”

The words “But don’t sell me short” got a lot of play time on TV and radio and just in time for Spring Training, and that soundbite could get more play in the future.

Bryce Harper in his social media then started talking about the skies the limit.

Time for a flashback.

On June 29, 2012 early in Harper’s rookie season, “You look at Cal Ripken. You look at Derek Jeter. You look at all the greats that played for one team their whole career. I want to be like that. I’ve always wanted to be like that. I’ve always wanted to play with that same team. Having a community and fans like we do in D.C. that love our players, love everything about us, we deserve to give something back to them. I want to do that. I don’t want to do anything else.” 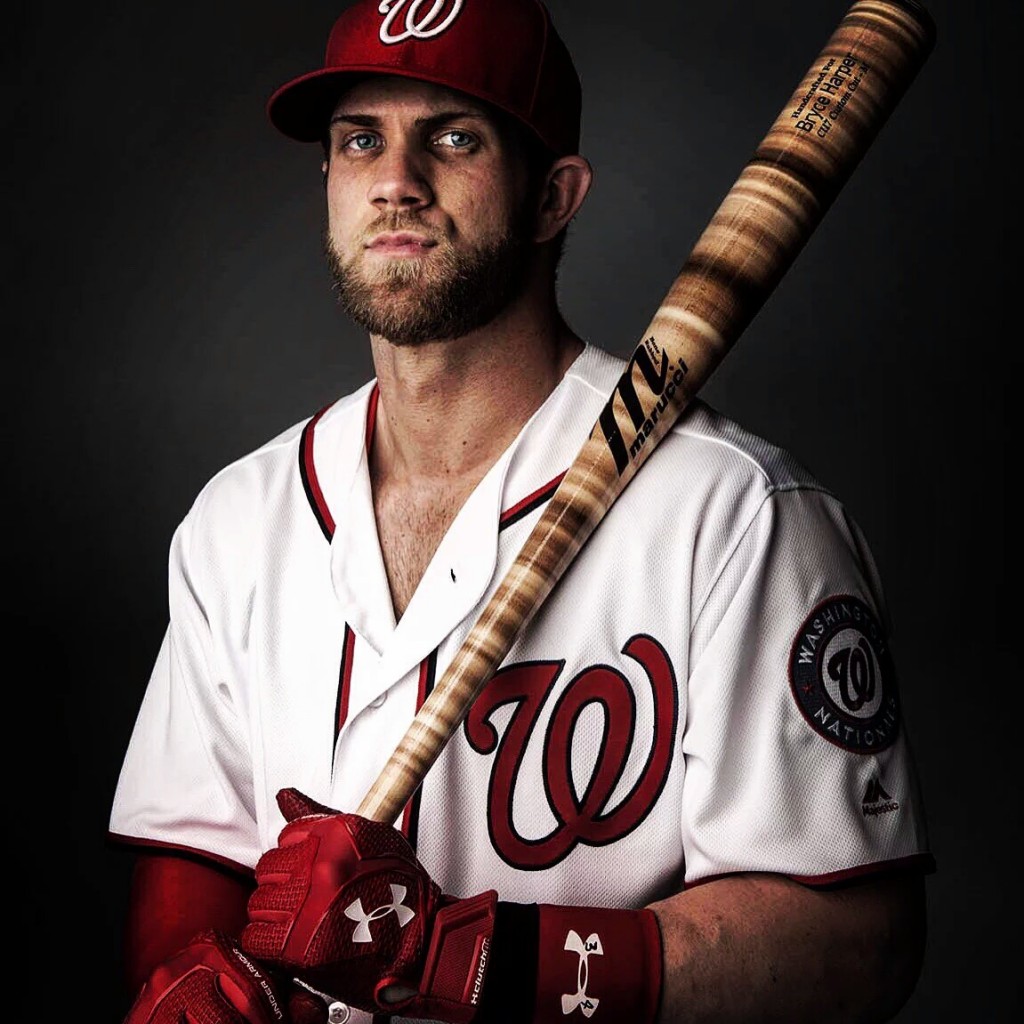 Harper often talks about the DC love, and how he wants to play his entire career for DC and bring a championship to Washington, DC, and hoist the trophy. Bryce often uses the hashtag #DCorNothing. This off-season Bryce made tributes to Kirk Cousins while wearing his ‘You Like That’ shirt’, and then sported a Redskins cap at the airport and during the Super Bowl.

bharper3407: #TBT to last week, what a great time it was in DC! I love my fans and the city of DC so much #Blessed#DCorNothing

Words are words and talk is cheap. The proof will be in the pudding or the Baker’s cake or something like that. If Bryce wants to stay, he will stay, and if he wants to go, he will go. Time will tell with Bryce Harper.

In a trip to Nats Park in 2013, Scott Boras said,  “I’m more into 12-year deals for young players. The M.O. is, you want to keep them in the franchise, and you want to be there for the fans and be a marquee for them. So why not?  When you have extraordinary talent, you have to really think out of the box because it’s something no one else in your league has. That concept is always something that will be received by few and looked down upon by many, but when you go back and look at decision-making and what the cores of franchises are, you have to figure out a way to keep five or six rather than one or two. My thing is, if equilibrium is X, you better be figuring out Y. When you’re doing what everybody else is doing, you’ve built the road to let probabilities take over, not the intellect. There are some models that if you have great young players, particularly position players, you’re going to have to do something different if you’re going to be a team of distinction. Everybody is following the same model now. That means there’s going to be more creativity by few that I think is going to give those teams an advantage under this system. As players grow to understand the value points of the contract structure, there’s going to have to be some creative things done by ownership to obtain those players. If not, the structure isn’t working for any players, especially the most talented. Not as I see it, anyway, given the revenues.”

At the beginning of February 2016,  Boras likened himself to an OB/Gyn in that they both deliver but sometimes it the process takes longer than others.  Boras also says he created the opt-out clause and that’s one of his strategies with Free Agents that also includes his drive-thru “Happy Meal” method. So why not “equilibrium is X, you better be figuring out Y.” Huh, what? Those equilibrium points are in economic models, and if nothing else Boras is entertaining in interview. Not sure what Boras means many times, but the man delivers results and he will deliver with Bryce Harper in a record breaking deal.

Boras continued with his theories, “If you go back and you look for star players, what they usually do over those years, you have to say that’s a pretty good bet.  When you’re getting into years that are short-term for young players, I don’t know what the value that would be for a player, when you talk about buying out Free Agent deals. There is value in those relationships, obviously. We know one thing. A model where players couldn’t go anywhere, the fans would go see the same players for a decade. They loved that: ‘These are our guys.’ When I was a kid, I saw Willie Mays all the time. You knew who the Giants were. Because their talent level was so extreme, that wasn’t changing for 10 years. Everything centered around the core. It’s much easier to build a team around that. I think it’s very easy. It’s always about information.”

Boras continues about negotiating, “The two sides have to talk about what their concerns are. You have to talk about a whole industry-wide view on what’s good for you and what’s good for the player. When you have these media conglomerates, there’s a definite value for particular players that is well beyond the performance value of a player. They know these players are going to be very good for a long time. Then you have to calculate injury, which you can insure against. You can buy insurance policies for that. So then you’re trusting the equilibrium of the player’s abilities and trusting also the fact that he has the psychology to take on a major commitment to come out and play hard and execute that contract well. That’s certainly part of our job.”

Rizzo said this week that he opened dialogue with Boras about Bryce Harper and long-term planning, “They’re conversations. They’re not even talks, really. Just the beginning, like we’d do with just about anybody. Talks are talks and negotiations are negotiations. We have not been negotiating. We have dialogue like we have with everybody.”

It was a year ago that Scott Boras talked about people who said he doesn’t do long-term extensions and Boras said, “Whoever wrote that, I’ve heard it a lot, and it’s just factually incorrect. I’ve had a number of players who have signed long-term contracts with teams prior to free agency. You know, I did it with the Atlanta Braves and Greg Maddux. He was in Atlanta for five years, signed for an additional five years before he was a free agent. It really depends on working out a relationship that’s fair for both sides. I work for people. I’m a lawyer, and I represent players. I certainly invite players to tell me their need and wants. So I provide them with information and try to facilitate those goals. A lot of times when you have high-profile players — in Max Scherzer’s case, the Tigers came and offered him $144 million, and I guarantee that 99% of the world would have said, ‘Why would Max not sign that?’ And it’s because I gave Max information that the market for him was dramatically different than that. And it’s his choice. Many players would’ve signed the contract. Max’s objective was certainly to pursue his true value in the current market [Scherzer signed the 7 year $210-million deal with the Nationals]. And that’s really what the attorney [agent] does for a player. He gives them choices, and the player directs him to what choice he wants to make.” 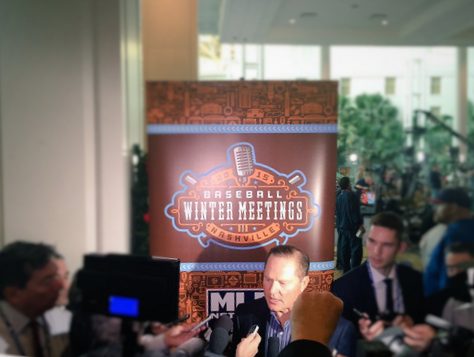 While Scott Boras can’t point to many long-term deals he’s made before a player reaches Free Agency, Bryce Harper could be the exception because he is Bryce Harper.  Do you turn down a $500 million deal if the Nats hand that to Boras?  Time will tell.

Ron Harper, who is Bryce’s dad, had this to say during Bryce’s rookie season,  “Bryce is as loyal as they come. He doesn’t care about [anything] but winning a championship.”

Okay, you heard it from Bryce’s dad that “Bryce is as loyal as they come.”  Soon we will see loyalty tested! The end result goes beyond loyalty as it runs both ways, and this will come down to money, and lots of money.

Bryce’s next contract might be larger than the nominal GDP of entire countries like Tonga at $400 million or Dominica at $500 million or possibly near the size of Samoa at $600 million. Maybe he will just buy one of these islands and rename it Royce Island or another catchy name.

Remember these words from Mike Rizzo last November, “We want Bryce to be here for a long, long time. He’s a guy I’ve seen play forever, it seems — since he was 14. He’s a guy we drafted, signed, developed, and he’s turned into an MVP-type player for us. We love the guy. We’ve got him locked in for the near future. We certainly would love for him to be a National for life.”