Below are FanGraph′s projections that we have compiled in a graph for the 2016 Nats. We took a graphic look at where FanGraphs have the Nats projected on the standard slash: 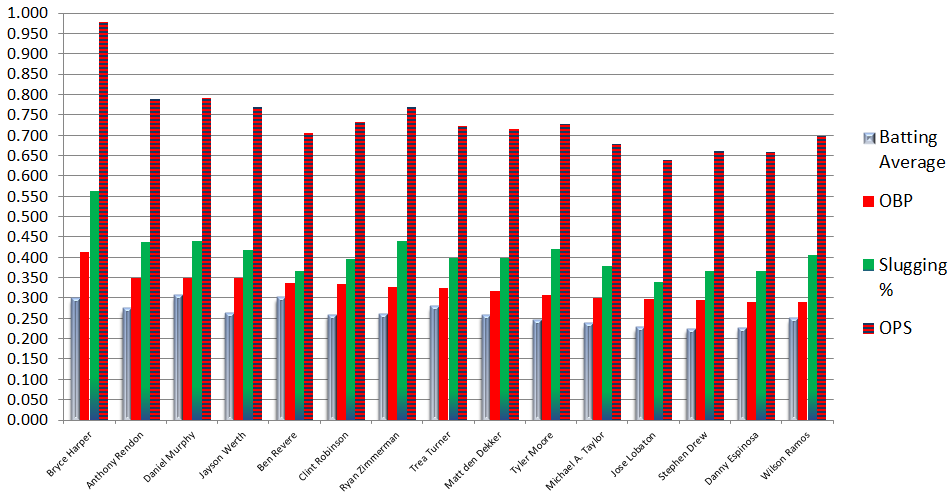 There are a few notable stats starting with a nice bounceback year for Anthony Rendon although they aren’t quite projecting Tony 2-Bags near his 2014 production when Rendon finished 5th in the NL MVP voting.

Bryce Harper is projected at a .977 OPS and is set to lead the Nats in most categories except Batting Average where Bryce gets edged out by Daniel Murphy and Ben Revere.

Here is the full screengrab from FanGraphs projections:

Let’s revisit what Mike Rizzo had to say at the start of the off-season:

“You’re going to have a team that is going to have 4 or 5 players that are 24 and younger. It’s going to be a younger, less experienced, but more athletic team with more speed. Those are the characteristics that we’re going to bring into the season.”

On the age of the team, there should be a roster looking at 5 players who are 24 years old and younger including Trea Turner, Joe Ross, Bryce Harper, Trevor Gott, and Felipe Rivero.

That Rizzo quote sounds like the secret formula to the Royals blueprint to the World Series the last 2 seasons, and the only part missing is the shutdown bullpen in Rizzo’s description.

The Royals led the league in team defense with their athletic players who also led the league in offensive contact with lowest strikeout rates which was a flashback to vintage baseball where defense and low strikeouts was coveted and prioritized.  Rizzo has done a fine job increasing team offensive contact rates with lower strikeouts as well as the team speed. What isn’t as clear is the team defense as to whether that will improve in 2016.

“A lineup that has a healthy Rendon, a Michael Taylor, a Trea Turner, a Bryce Harper and Danny Espinosa—those are five guys that are young players that all have exceptional speed and good baserunning ability. In that regard, that’ll be a little transformation.”

Rizzo went on to say that he is confident with the players he has and might not go for any of the big name players although we saw he added Daniel Murphy and traded for Ben Revere to further strengthen the contact and athleticism and Revere certainly adds the speed.

Rizzo spoke the truth as he did NOT add any free agent outfielders; however, Rizzo hinted that Michael A. Taylor was going to be one of the outfield guys and Rizzo added Ben Revere who looks like the presumptive starting CF:

“I wouldn’t think we’d be big players for one of the big Free Agent outfielders. We like the three [outfield] guys that we have. We think Michael Taylor is going to be a terrific major league player.”

Let’s say Rizzo makes no more moves, here are your potential Opening Day position players on the roster (plus Trea Turner) for 2016 with the player’s final 2015 stats: 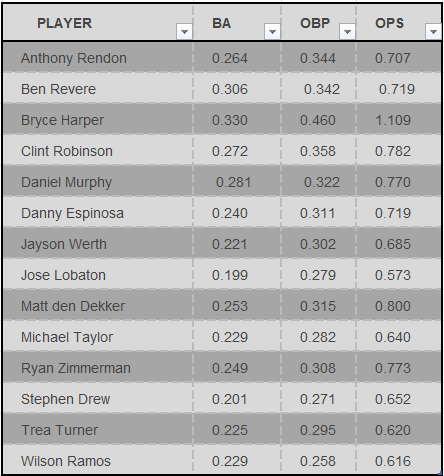 Mike Rizzo did a great job of predicting what his 2016 Nats were going to look like before the off-season got going. Now do we think Mike Rizzo is done?