There is some very simple math in the roster shuffle that the 40 man roster can’t ever go above 40.  Simple math doesn’t make the reduction in staff simple.

If the Nats don’t make any trades of players on the 40 man roster to reduce the roster down to 38 players,  then as soon as the Nationals officially announce the signings of Daniel Murphy and Stephen Drew the Nats must also give the corresponding moves to remove players from the 40 man roster via the dreaded DFA (Designated For Assignment).  Most likely the Nats have already contemplated the DFAs and could be announcing the fate of those players simultaneously along with the new signings. In the meantime we will still hold out hope for that rumored trade(s) since Rizzo is due for his annual blockbuster!

Stephen Drew is a fine backup infielder, complements Turner (platoon split) and Murphy (glove) well and $3 million is nothing.

Let’s revisit who is on the 40 man roster now:

Here is our 2016 Opening Day roster projection with the additions of Daniel Murphy and Stephen Drew. 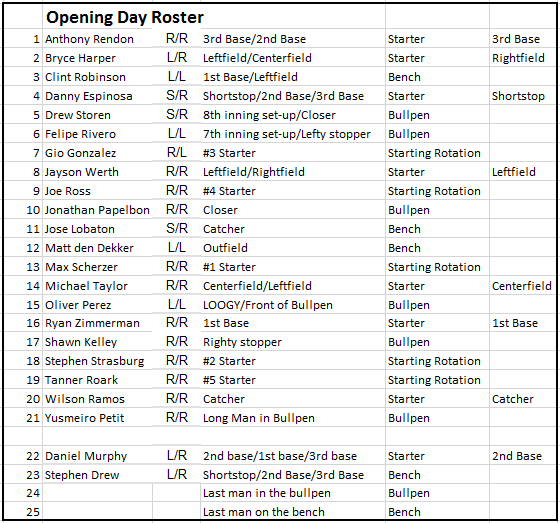 The last spot on the bench right now would go to Tyler Moore with Trea Turner in AAA, and that could certainly change if Rizzo brings in a new starting outfielder. The long-shot is Chris Heisey who is not on the 40 man roster.  The last spot in the bullpen would be a pick ’em between Blake Treinen, Trevor Gott, and Rafael Martín.  The long-shot for the bullpen is Sean Burnett who is not on the 40 man roster.

Per our source last week, we were told that Erik Davis was to be DFA’d to make room for Daniel Murphy.  We don’t know who would be DFA’d for Stephen Drew, and there are many candidates to be cut. Again, keep hoping Rizzo can pull off a trade to balance the 40 man roster.

In that DC sports cross-pollination, you get many Nats cheering on the Washington Redskins, and it started last week with the Washington Nationals official Twitter sending a congratulations and then to Ryan Zimmerman doing a video message, and Matt den Dekker who was in Dallas to see the Redskins win on Sunday.