Let’s start by reiterating the words of Mike Rizzo from November, “The 2016 Nats will be younger, less experienced but more athletic and speedier. A little transformation…We would like to get more left-handed.”  Those are Mike Rizzo’s own words.

A Dusty Baker-Brandon Phillips reunion in D.C.? Story on trade talks between #Nationals and #Reds:… https://t.co/IJ3m5XSO3a

Yesterday, the Nats were attached in rumors to Brandon Phillips based on information from Ken Rosenthal.  Based on what Rizzo is looking for per the quotes above is not Brandon Phillips.  He is not ‘younger’ in baseball terms as he will be 35 years old in 2016 and he is not left-handed which were 2 of the main points that Rizzo made for his 2016 roster.

Phillips speed did return in 2015 after an injury filled 2014 season.  If you were thinking of Phillips as a leadoff man, he was an off again/on again leadoff man in 2015 for 64 games for the Reds and was not good .271/.304/.368/.672.  One odd factor on Phillips is that his splits on the road were much better away from the Great American Ballpark which bucks the trend for Reds players. Phillips OPS at home was .688 vs .755 on the road.

The Reds want prospect(s) back in return for Phillips and would want the Nats to pick up a chunk of Phillips remaining salary as he is owed $27 million over the next 2 years, and this is where Rizzo must tread carefully.  Phillips is not worth $13.5 million a year based on his 2016 projections of a .695 OPS per BBREF and you would expect further age regression in 2017.

There are young (or younger than Phillips) left-handed bats who can play 2nd base who fit the young and left-handed needs and Scooter Gennett hits RHPs well at .279/.310/.403/.713.  Gennett will be 26 years old next season. Gennett is not a speedy runner but is a good baserunner.  The other idea is the left-handed Luis Valbuena who is 30 years old and hits RHPs even better at .247/.327/.481/.808.  Both Gennett and Valbuena are poor against LHPs and would require a platoon to make sense which is perfect to combine with Espinosa who hits LHPs well. The good news in baseball is that the majority of starting pitchers are RHPs.

The question marks in this middle infield goes back to how much time Trea Turner needs in the Minors and how ready Danny Espinosa is to be penciled in as the Washington Nationals starting shortstop on April 4, 2016.  This is a leap of faith for Mike Rizzo and Dusty Baker.  Most of the names passed around even including Free Agent lefty Kelly Johnson and this newest rumor of Brandon Phillips just seem to bring up more questions than answers.

We believe we were the first with sourcing the Nats were talking to the Rocks and Astros at the beginning of the Winter Meetings although the Astros conversation quickly flamed out when the Astros traded for Ken Giles as their only interest was in Drew Storen.  The Rockies rumors are still alive and well as that’s intensified with the Rockies listening on CarGo, Blackmon and Dickerson. 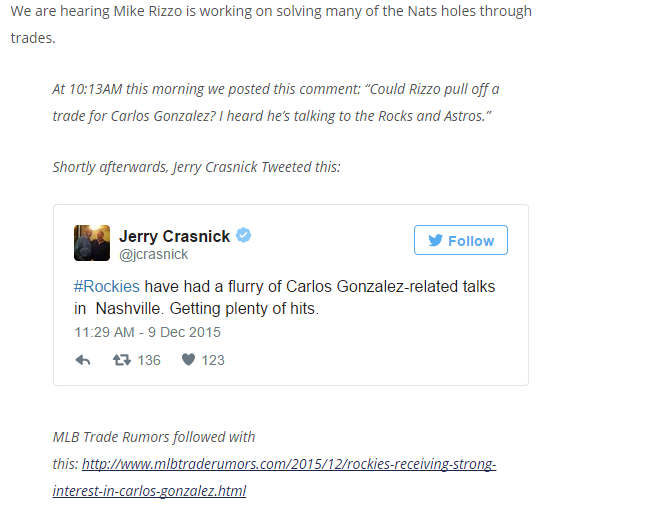 Unfortunately any time you look at Rockies players, it takes the added analysis to see what you are really getting. The good news is all 3 of those Rockies outfielders are left-handed and Blackmon is the leadoff and also has much better splits vs. RHPs with a .709 vs .828 OPS. Blackmon also is speedy with 43 stolen bases last year.

Nationals and Rockies have talked about Charlie Blackmon, but Colorado wants a lot for him. Corey Dickerson could be in play, too.

Here are the road splits for the 3 Rocks outfielders from BaseballReference.com:

Not the stellar numbers you were expecting given their great overall numbers; however, usually when you trade for a player coming from a hitter friendly park like Coors, they still play better at your home park due to that homefield advantage of sleeping in your own bed and the home routine which is why these numbers are illustrative as a minimum level to expect.

Perhaps you also introduce Michael A. Taylor as a 4th outfielder to platoon with Blackmon and create some better overall numbers as MAT hit 44 points better to his OPS vs LHPs.

The other lefty alternative we will go back to is Gerardo Parra and his name was in lights this week every time the analysts flashed up Jason Heyward’s stats.  Most people probably don’t know that Parra is 2nd to Heyward in defensive runs saved for rightfielders although 2015 was an off-year for Parra.  Parra is a Free Agent and couldn’t be QO’d which means he gets signed for money only and the Nats don’t forfeit a draft pick.

The other out-of-the-box idea goes back to getting Mike Leake as a Free Agent which would allow Rizzo to trade Gio Gonzalez.  You may remember the rumors that Gio to Yelich was discussed and dismissed quickly and Yelich had an off-year himself.  Trading a frontline starter gets you more opportunities and also can get you laughed at, and Rizzo has been laughed at before.

Keep trying Mike Rizzo and think real hard on Brandon Phillips—not young, not left-handed, expensive, and will cost you prospect(s).

This entry was posted in Analysis, Dusty, RizzoForADay. Bookmark the permalink.
← Previous Article | Next Article →