We all knew Greinke was going to sign this off-season with either the Dodgers or the Giants.  Wrong.  In the shot heard ’round the Majors, it has been reported that Zach Greinke just signed a record baseball contract for 6 years at a total contract of $206,500,000 with the Diamondbacks of Arizona and that is not a misprint. The annual amount of that deal before deferrals is $34.4 million per year! http://sports.yahoo.com/news/ap-source-zack-greinke-diamondbacks-reach-6-deal-015320122–mlb.html

You wonder how the Diamondbacks all of a sudden can pull this type of deal off and outbid both the Dodgers and the Giants.  Simple, RSN (Regional Sports Network) money kicks in for the 2016 season under their new FOX deal they signed earlier this year for Arizona. The deal believed to be worth $1.5 billion plus an equity share in the network over 20 years averages to over $75 million a year and some estimates believe with a profit share could be closer to $100 million a year.

Contrast that with the Nats MASN deal where the Nats are currently getting paid around $40 million a year versus the $60 million the arbitration panel originally awarded and you try to do that math and something doesn’t add up.

It doesn’t add up because the D’Backs local TV market according to the newest Nielsen ratings is much smaller if we compare DC to Phoenix. DC has  32.17% more TV households!  http://www.tvb.org/media/file/2015-2016-dma-ranks.pdf  If we do some simple math taking that $75 million a year Arizona is set to get multiplied by 32.17% that would equate to $99.128 million a year the Nats should be getting using that very simple math.  The Nats asked the MLB RSN arbitration panel for around $105 million annually and it’s deals like the one Arizona got which proves out that $105 million a year isn’t crazy when you consider how transient Phoenix is during the summer as the snowbirds move back north.

Have you ever been to a Diamondbacks game? You can expect a conglomeration of fans for both the home team and visitors as well as fans with no allegiance to either team.  Arizona’s home attendance was 25,680 per game in 2015 compared to 32,343 for the Nationals.  Arizona ranked 23rd in the Majors in attendance compared to 11th for the Nats.

The RSN TV money is essential to competitive survival for the Nats. It’s also essential for signing Bryce Harper to a long-term contract.

Speaking of Bryce Harper, he was a busy man in Las Vegas last night as he pulled off the tripleheader going from the NASCAR Awards show to the UNLV-Oregon basketball game to the Sam Hunt concert.

This is a photo at the NASCAR Awards show taken by our staff photographer Sol Tucker: 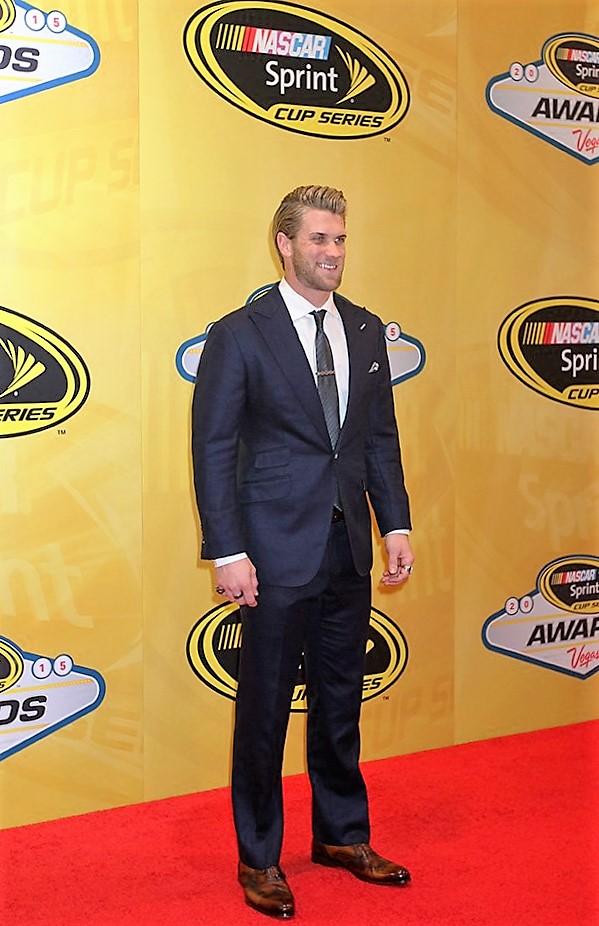 This is Bryce at the basketball game where he saw UNLV upset #15 Oregon in a game where UNLV’s 7 footer Zimmerman dominated the boards:

This is Bryce with Sam Hunt before his concert in Vegas in a screengrab from his Instagram account. Also don’t worry, Sam Hunt isn’t wearing a Phillies cap as it’s his own logo cap: 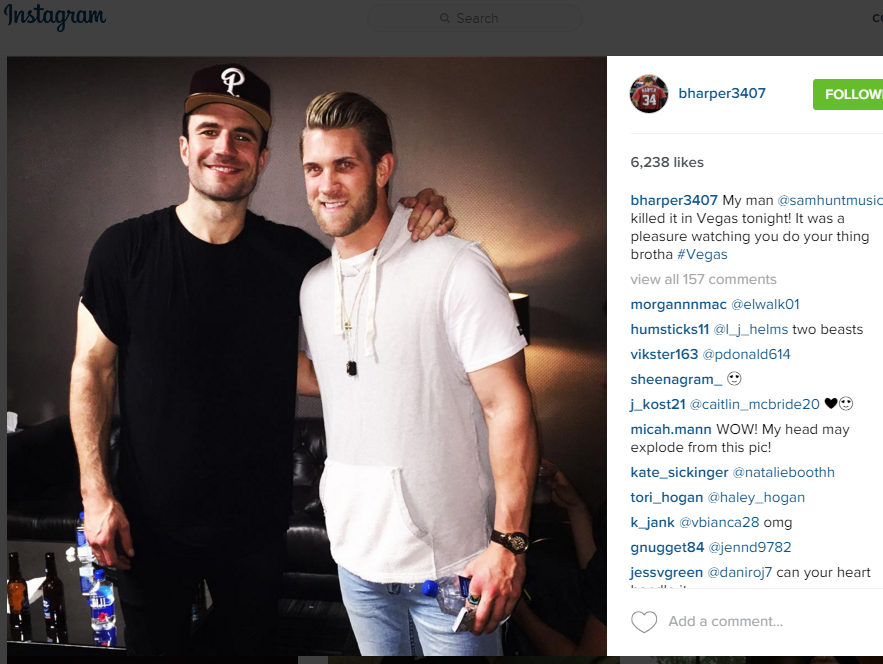 The Nats need that RSN money to guarantee that Bryce remains a Nat for life.

This entry was posted in Awards, Harper, MASN. Bookmark the permalink.
← Previous Article | Next Article →