The Nats as you know will be moving to their new facility in West Palm Beach for Spring Training beginning in 2017.  The new facility is very similar to the way facilities are planned in Arizona and similar to the facility the Diamondbacks and Rockies share at Salt River Fields in Talking Stick.

Hopefully you all get to Viera to enjoy it one more time. Pitchers and catchers will be reporting in early February with position players not too far behind, and the Spring Training games will start on March 2nd on the road versus Tampa. Of note, 2016 is a leap year and February goes to 29 days for 2016.  Last year the Nats reported officially on February 19th and have not officially announced reporting days yet. This year the St. Louis Cardinals have already announced their pitchers and catchers will report on February 17th which is the earliest of all teams that have announced so far and that compares to the Twins on February 21st which is the latest reporting time for any teams. We would expect the Nats to be somewhere in between those dates. 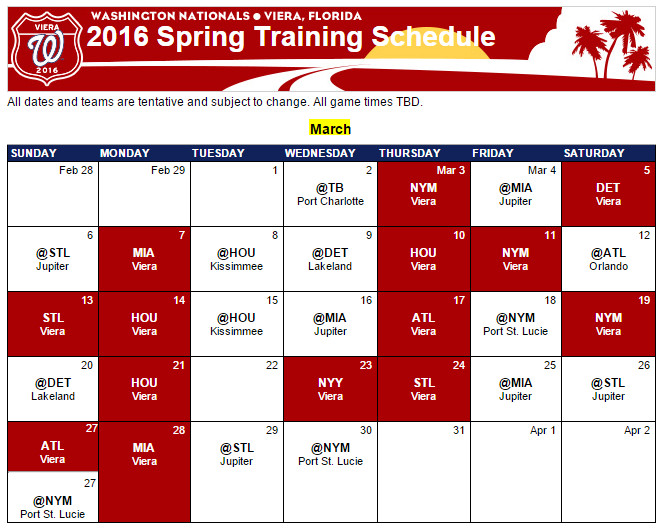 The Nats final home game in Viera will be on March 28th, and they will finish the Grapefruit League schedule on the road against the NY Mets on March 30, 2016.