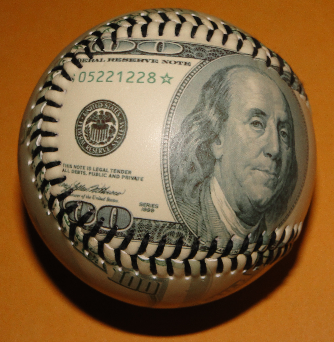 breaking into a figure firmly in the Top 1/2 Dozen for Opening Day 2015.  The Nats Opening Day payroll was #6 according to Sports Illustrated’s calculation of Opening Day payrolls at $162,014,559.  The 2016 Opening Day payroll budget for the Nats is almost certainly known by Mike Rizzo at this time; however, without the MASN settlement for RSN rights, don’t expect the payroll to far exceed 2015’s $162 million figure.

What we want to do is give you the projections as of right now for projected payroll before the team adds new players and there are actually 2 numbers due to payroll deferrals and actual cash.  Actual cash payroll we are projecting today at just over $127 million with our projected arbitration players salaries.   Strasburg in 2015 was just under $7.5 million and we are projecting $11 million, but also don’t know if Stras will see a meteoric rise above those numbers to blow our projection as Jordan Zimmermann earned $16.5 million in his final year which was part of a 2 year deal he negotiated.  You will also notice numbers next to Scherzer’s name for his salary cap hit due to his massive salary deferral and Papelbon has a 1 year salary deferral of $3 million to be paid in 2017. 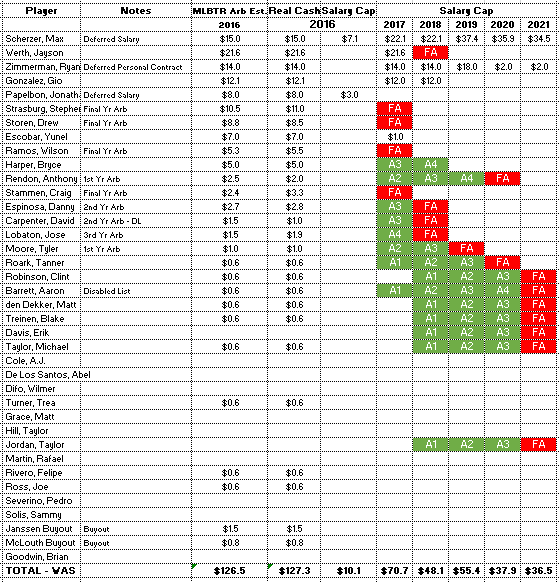 The fun part is projecting the numbers and the chart has the current 40 man roster plus the buyouts for Janssen and McLouth and disabled list players like Carpenter and Barrett, and Carpenter could certainly be a DFA candidate.

Adding the last key players to complete the 2016 roster is the unknown at this point in time. We also don’t know how these players will be acquired as to Free Agency or Trade which makes this exercise difficult to project with the many moving parts; however, give it a try and see how close you come with your projection.

Jon Heyman did a prediction of the Top 50 Free Agents and what he thinks they will earn. For instance, if the Nats signed Darren O’Day and Gerardo Parra according to Heyman’s projection O’Day will cost you $8.33 million a year and Parra will cost you $11 million. That will leave some room for another big lefty arm in the bullpen and Matt Thornton would probably take a small paycut from $3.5 millin to $3 million and that would put the Opening Day payroll near $160 million and hopefully leave Rizzo some money for a July 31st trade if he needed to add payroll.

Baseball once again humbled the highest spending teams as the Dodgers spent money at levels never seen before with an Opening Day payroll of $272,789,040 and they finished near $300 million and  the Yankees were almost 30% behind the Dodgers on Opening Day at $219,282,196.

From Business Insider and Spotrac is the payrolls of the 2015 playoff teams after the Wild Card round: 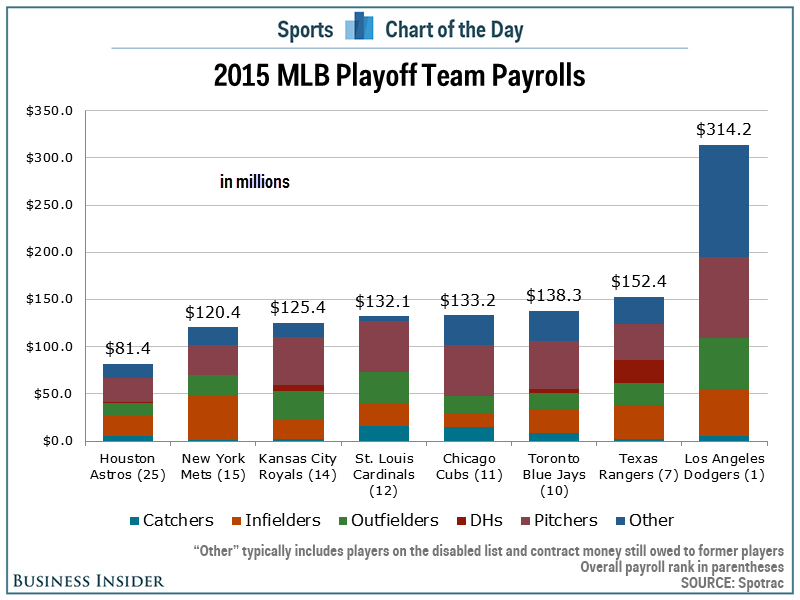 There have been many fans that believe making the playoffs is indicative of how much you spend and it used to work that way for the Yankees, but baseball has a way of bucking trends as the Houston Astros showed and the two World Series teams proved again.