There is no secret formula to finding a winning manager.  Even 3-time Giants World Series champion manager Bruce Bochy was considered a poor manager in his 1st managerial stint during his 12 year history with the San Diego Padres although Bochy had one very successful year managing a Padres team of Tony Gwynn and Kevin Brown. When the Padres and Bochy parted ways in 2006 after a combined career .494 winning percentage, Bochy was replaced by World Series champ pitching coach Bud Black.

Bud Black managed the Padres from 2007 to early 2015 and had a .477 winning percentage there in his career and he didn’t have Tony Gwynn on his roster or many “star” names in their prime.  In fact, several of the years Black managed the Padres, they were either dead last in team Payroll or near it.  In all, Black’s teams were in the bottom 5 teams in MLB payroll for all except 3 full seasons during his tenure.  Black had 2 winning seasons in his 8 full seasons with San Diego and had won a Manager of the Year award (2010) in a season when his team payroll was just $37.8 million, and you have to dig deep to really analyze whether he was an over-achiever or an under-achiever and it becomes mired in lots of opinions. To simplify, Black put together a bunch of rookie pitchers and developed them, but his offenses were usually in the bottom of the National League.  AJ Preller went big on the Padres payroll this year and their team lacked chemistry and only got worse after Bud Black left as he was fired when the team was 32-33.  Someone had to take the blame and Preller decided it was on Black.

Black was a 15 year pitcher in the Majors and was a successful pitching coach with the Angels.  He has had a good history of handling a youthful pitching staff; however, he has been criticized for a very vanilla offense and the question is whether it’s the coaching or the personnel.  In 2014, the Padres were dead last in the Majors in OPS and most offensive categories with a .634 OPS and the NL Average was .694.  In 2014, San Diego was 2nd in the NL and 4th in the Majors behind the 1st place Nats in team pitching.

Mike Rizzo’s job will be to assess how Black could do with this Nats team who also played it very conservative on offense and were 3rd worst in the Majors in offensive strikeouts.  The Nats also slipped in team pitching and defensive efficiency.

The Nats have their deficiencies that are hard to ignore on offense, defense, team speed, and pitching.   The clubhouse had some issues as witnessed by the very public “choke” in the dugout and the Werth/Williams problems detailed by Svrluga.

Many of the issues the Nats had will be solved in upgrading personnel, but there also has to be an off-season emphasis on some of the weak points in the play on the field.

You can read through old clippings, here’s one:

Harry Ralston “Bud” Black is 58 years old and was born in California and went to High School in Washington as in the state of Washington.  He went to college initially at Lower Columbia College and then transfered to San Diego State as an alum like Stephen Strasburg.

Bud Black and his wife Nanette, who is a pediatric nurse, have 2 daughters Jamie and Jessie.  Their youngest daughter Jessie Black has local ties as she graduated last year from the University of Maryland giving his family strong ties to the DC area.  Here are some  highlights of Jessie’s career as a Terp student athlete as she competed as a gymnast http://www.umterps.com/ViewArticle.dbml?DB_OEM_ID=29700&ATCLID=208124211  Jessie graduated with 2 degrees from Maryland with a Math degree as well as a degree in kinesiology.

Some trivia of interest on Bud Black as a player, he was the starting pitcher for the Royals during the famous George Brett pine tar incident, and Black gave up Reggie Jackson’s 500th career home run and Mike Piazza’s 1st career home run. Bud Black retired 10 years prior to the existence of the Nats, and he gave up 1 HR to an original Nat— Wil Cordero. Bud Black was a also a teammate of Matt Williams in their time together with the San Francisco Giants.

Bud Black has a World Series ring as a pitching coach with the Angels and one as a pitcher with the 1985 Royals. In a story of firsts and onlys, (as of today’s date as the Royals could win another WS shortly), Bud was a key part of both team’s first and only World Series championships!  In 1984, Black led the Majors in WHIP and 6th in ERA.

UPDATE (4:55PM 10/25/15):  Jon Heyman on CBS Sports wrote the quote below in Bold type confirming our report at 7:30AM 10/23/15 “On the managerial search front we have been told by another source that Dusty Baker was impressive in his interview and is considered a finalist as we reported earlier.  Somewhat surprising news and Baker joins Bud Black as a finalist.”

From Jon Heyman: “Baker and Black are believed to be the only two finalists for the job, so barring something strange happening, one of them will be the guy. The Nationals did interview many strong candidates, though there’s no word at this point of a third finalist”

Bud Black is lead candidate to replace Matt Williams and could be offered deal as early as tomorrow. Dusty Baker only other candidate left.

UPDATE (10:40 PM 10/25/15): As we’ve reported since early on Friday morning, the finalists for the Nats managerial job are Baker and Black. What we didn’t know is when the final decision would be made and our source confirms what Jim Bowden tweeted that Bud Black is meeting with Rizzo tomorrow.  With the World Series starting on Tuesday, the Nats would like to announce their managerial decision before the World Series starts. The Nats will have talked to Dusty Baker again also and appear close to their decision.

UPDATE (10:50 PM 10/25/15):   James Wagner and Chelsea Janes of WaPo are saying “Decision perhaps by end of week” but we will stick with what we are hearing from our source that the Nats would like to announce Monday or Tuesday before the World Series begins. 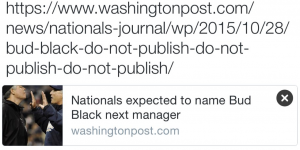